[Editor’s Note: Today’s guest post was co-written by Joseph Gentile, Esq, Co-Founder and Partner at Sarraf Gentile LLP, and Robert A. Izard, Esq, head of the ERISA team at Izard Kindall & Raabe. We have no financial relationship with either. We do see doctors occasionally offered a universal life policy as a work benefit, although these seem to usually be as part of a split-dollar life insurance plan where the employer and employee split the costs of the insurance. Work-provided life insurance policies are sometimes so bad that they violate the employer’s fiduciary duty to the employee, and just like a bad 401(k), open the employer up to lawsuits by the employees for violating that duty. Given low-interest rates the last few years, group universal life policies can fall into this category. While not addressed in this article, some of those split-dollar plans may end up with similar concerns. Certainly, this should provide a cautionary tale for anyone considering a universal life policy.]

I Purchased as an Employee Benefit a Universal Life Insurance Policy That’s Underwater, Now What?

Group Universal Life is frequently pitched to companies and their employees as a great add-on to their slate of existing employee benefits. They are touted as having many benefits in comparison to individual Universal Life policies, including that they may have lower premiums, more permissive medical underwriting, and portability (meaning you can keep the policy even after you leave your employer). These benefits are real, but unfortunately, these Group Universal Life policies also suffer from many of the same defects as their individual counterparts.

Universal Life (UL) insurance policies have justifiably been taking a beating in the press over the last few years. Most of the criticism has to do with the dramatic Cost of Insurance (COI) increases in some of the policies. UL policies are permanent life insurance products that combine the age-adjusted cost of insurance of term life insurance with the tax-advantaged savings account element of whole life insurance. UL policies frequently come with a guaranteed minimum interest rate on the savings account. The most common historical minimum rate was 4%. For policies sold in the 1990s, lofty illustrations were presented to customers that showed phenomenal performance of the policies—if interest rates stayed at their then-current rates of about 8%.

The interest rate is important because returns are credited to the cash value of the policy and are meant to offset the ever-increasing cost of insurance inherent in UL policies. The best way to think about a UL policy is that it is term insurance but for life and it reprices upward every year. The cost of insurance may look cheap at 40 but is tremendous by the time you are 80. If everything works according to plan, the cash value of the premium you contribute every year accumulates and grows over time, based on the interest rate paid by the insurer. At some point, the interest payments on the cash value become large enough to offset the COI and is able to fund premiums in perpetuity. The policy effectively pays itself off.

If premium contributions and interest don’t keep pace with the rising cost of insurance, the cost of insurance eats into the cash value. At some point (usually later in life) the cash value is exhausted, and the insured is left with massive premium bills to keep the policy in force, and these premiums only go up every year. Few people keep the policies in force at that point and simply end up surrendering their policies after years of contributions.

Life insurance companies are pressured in a low-interest-rate environment as well. Interest rates have plummeted and have remained below the guaranteed rate of 4% for years. Insurance companies wagered that interest rates would remain above 4%. That lost bet has caused a rash of negative consequences, the most important of which is that insurance companies are earning far less on these policies than they are paying out. Unfortunately, some insurers have tried to pass the buck to their customers. Instead of eating the losses, they raised the cost of insurance of these policies, in some cases as much as 200%. Some viewed this as a backdoor way to violate the rich guaranteed interest rates the policies were initially sold on. 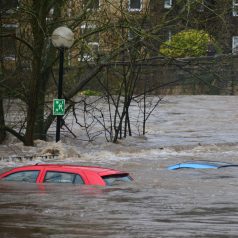 Unless you’re SCUBA diving, being underwater is bad.

Legal Justifications for Raising the Cost of Insurance

How did the insurance companies justify this? Many UL contracts allow the insurer to raise the COI in certain defined circumstances. The most common one is if mortality experience is worse than forecasted. If insureds were dying younger than expected, the insurer reserved the right to raise the COI. That is fine except people are generally living longer today than when many of these policies were issued decades ago. Any supposed “change” in mortality rates would thus support reduced premiums, as opposed to an increase in premiums. Nevertheless, insurance companies have raised the COI based on this excuse, which has resulted in many insureds, after decades of diligently paying their premiums, being forced to pay exorbitant new premium rates or, even worse, letting their policies lapse.

There has been a slew of litigation and press over this problem, but one group has largely been ignored—those that acquired these UL policies through their employment. Thousands of employees/retirees acquired and paid handsomely for Group UL policies, mostly as a way to supplement their retirement savings. Employees were offered these UL policies as part of a group employee benefit and bought them based on the same rosy illustrations that insurance companies used to sell UL policies to individuals. For many, it’s been a disastrous “investment”. Like other UL purchasers, many employees will take a total loss on these policies after paying tens or even hundreds of thousands of dollars into them.

However, there is an important distinction between group UL purchasers and individual UL purchasers. Those that acquired UL policies as an employee benefit may be protected by a powerful federal law, the Employee Retirement Income Security Act of 1974, better known as ERISA. Under this law, the insurance companies that sold these toxic policies may be considered fiduciaries of the employees. As such, they are supposed to administer these policies in the best interest of the employees. This means that deviating from the insurance contract in a way that harms the employee could be deemed a breach of fiduciary duty. Such breaches can carry significant penalties for insurers and provide powerful legal claims for refunds on behalf of the insured employees.

A split-dollar life insurance plan (where the employer and employee split the costs of a life insurance plan as an employee benefit) shares some of the traits of a Group UL policy, but how it works and whether it is subject to ERISA is a fact-intensive inquiry that generally depends on the circumstances and specific wording of the plan. As such, split-dollar plans are beyond the scope of this article.

ERISA is a highly complex area of law. Given the size of the investment for most affected employees/retirees, it is prudent to consult with an attorney who regularly handles these types of cases and has experience working particularly with life insurance matters. Most qualified attorneys take these types of cases on a contingency basis which means clients don’t pay any fees unless the case is successful.

What do you think? Would you seek litigation under ERISA law for an underwater Group Universal Life insurance policy? Why or why not? Comment below!